All services and prices are per our booking systems - Genbook

Do you have questions about cupping? Are you ready to book your appointment?
Call (832) 998-1688 to talk to a cupping specialist.

What is Cupping Therapy? 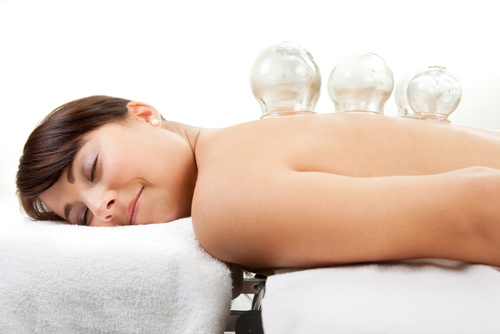 Cupping therapy is an ancient form of alternative medicine. In ancient times (cupping with animal angle) was also known as "corner method." This cupping method uses heat to eliminate the air in the cup causing negative pressure on a specific area. After the stimulation of suction the local congestion or blood stasis phenomenon increases blood circulation, qi, and can reduce swelling and pain to treat the symptom.

Another healing aspect of cupping therapy is through the release of toxins in the body. The suction from the cups can penetrate deep into your tissues causing the tissues to release harmful toxins. It triggers the lymphatic system, clears the blood vessels, and stretches and activates the skin.

Learn More About all of the Services we Provide

Cupping therapy is part of Chinese Traditional medicine (TMC). The therapy of cupping has been used in China for thousands of years. At first it was applied using cattle horns or cross sections of bamboo. To create negative pressure inside the horn or bamboo these ancient ‘cups’ were boiled in water or a fire was ignited to expel the air and suck the cups onto the skin. These cups were used mostly to draw out pus and blood in the treatment of boils. Cupping was originally used as an auxiliary method in traditional Chinese surgery. Later it was found to be useful in treating other diseases and devolved into a special therapeutic method.

There is reason to believe the practice dates from as early as 3000 BC. The Ebbers Papyrus, written c. 1550 BC and one of the oldest medical textbooks in the Western world, describes the Egyptians' use of cupping, while mentioning similar practices employed by Saharan peoples. In ancient Greece, Hippocrates (c. 400 BC) used cupping for internal disease and structural problems. The method was highly recommended by Muhammad and hence well-practiced by Muslim scientists who elaborated and developed the method further. Consecutively, this method in its multiple forms spread into medicine throughout Asian and European civilizations. In China, the earliest use of cupping that is recorded is from the famous Taoist alchemist and herbalist, Ge Hong (281–341 A.D.)

Cupping therapy become popular in the treatment of Western athletes. In the 2008 Olympics in Beijing there a swimmer on the China team, Qun Wang. The international media became curious about the cupping marks left on her back. In 2016 Michael Phelps sported deep-purple bruise-like circles on his shoulder. These signs of Cupping, the ancient Chinese healing practice, experienced an Olympic moment. 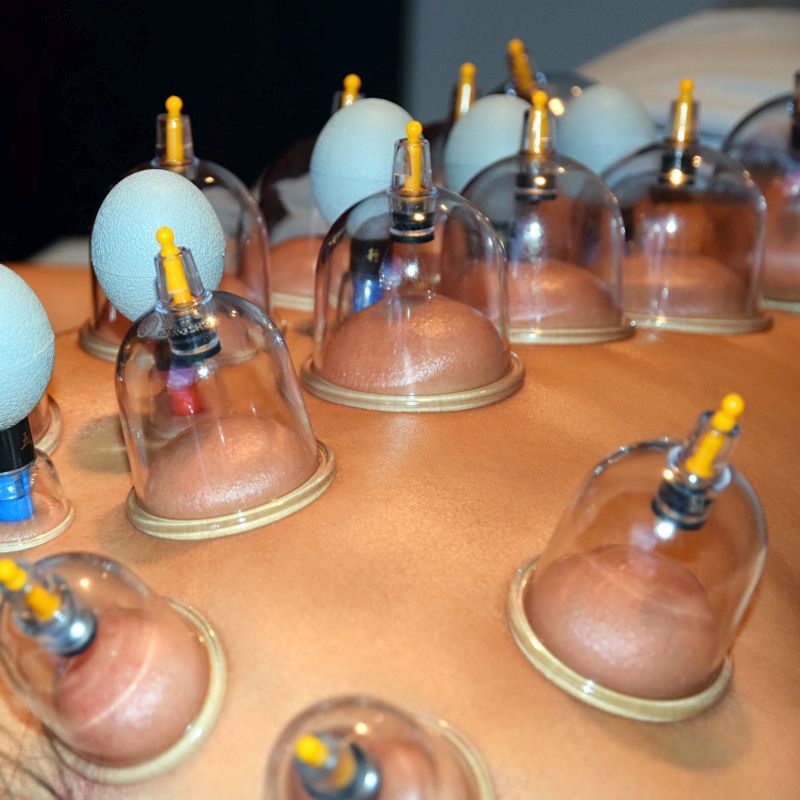 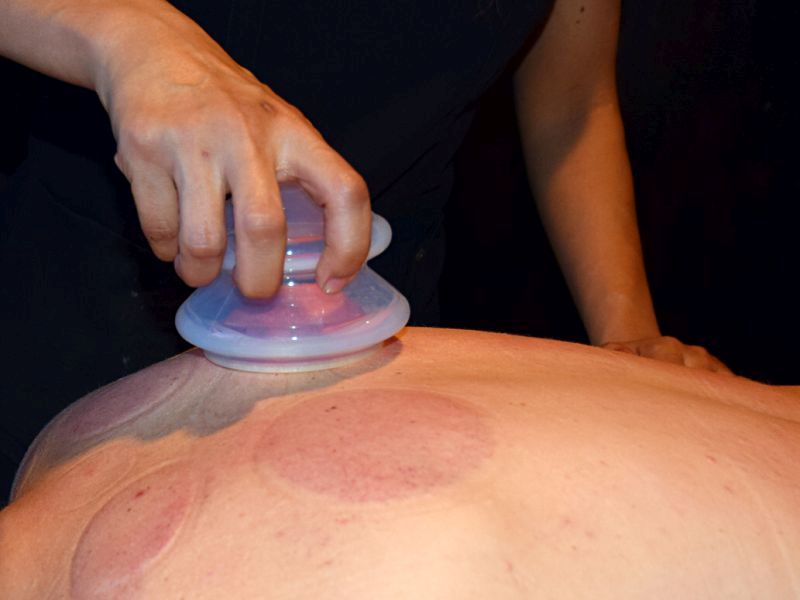 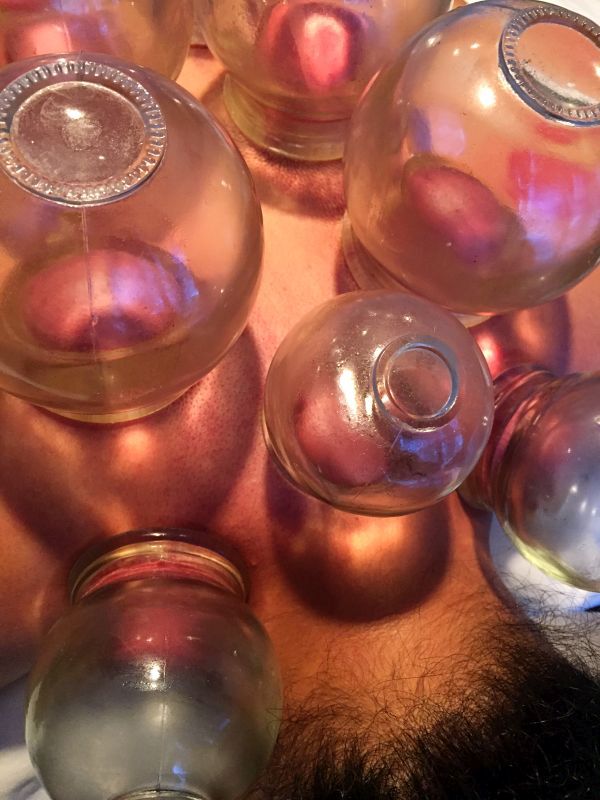 What is Gua Sha Therapy?

Gua sha is a traditional Chinese medical treatment in which the skin is scraped to produce light petechiae. Practitioners believe that gua sha releases unhealthy bodily matter from blood stasis within sore, tired, stiff or injured muscle areas to stimulate new oxygenated blood flow to the areas, thus promoting metabolic cell repair, regeneration, healing and recovery. Gua sha is sometimes referred to as "scraping", "spooning" or "coining". According to traditional Chinese medicine, qi is energy that flows through the body. Many people believe that a person's qi must be balanced and flowing freely to ensure their health and wellbeing. People believe that qi can be blocked, causing pain or tension in the muscles and joints. Gua Sha aims to move blocked energy to relieve aches and stiffness.

What is Tui Na Therapy?

Tui Na is a form of Chinese manipulative therapy often used in conjunction with acupuncture, moxibustion, fire cupping, Chinese herbalism, t'ai chi, and qigong. Tui Na is a hands-on body treatment that uses Chinese taoist principles in an effort to bring the eight principles of Traditional Chinese Medicine (TCM) into balance. The practitioner may brush, knead, roll, press, and rub the areas between each of the joints, known as the eight gates, to attempt to open the body's defensive chi (Wei Qi) and get the energy moving in the meridians and the muscles. Techniques may be gentle or quite firm. The name comes from two of the actions: tui means "to push" and na means "to lift and squeeze." Other strokes include shaking and tapotement. The practitioner can then use range of motion, traction, with the stimulation of acupressure points. These techniques are claimed to aid in the treatment of both acute and chronic musculoskeletal conditions, as well as many non-musculoskeletal conditions. As with many other traditional Chinese medical practices, there are different schools which vary in their approach to the discipline. It is related also to Japanese massage or anma.

In ancient China, medical therapy was often classified as either "external" or "internal" treatment. Tui Na was one of the external methods. Tui Na includes what is popularly known as "acupressure," where practitioners use finger pressure instead of needles to stimulate the acupuncture points. Tui Na is a treatment to address specific patterns of disharmony. TCM uses Tui Na to harmonize yin and yang in the body by manipulating the Qi in the acupuncture channels.

What is Moxibustion Therapy?

Moxibustion is a traditional Chinese medicine therapy which consists of burning dried mugwort on particular points on the body. It plays an important role in the traditional medical systems of China (including Tibet), Japan, Korea, Vietnam, and Mongolia. Suppliers usually age the mugwort and grind it up to a fluff; practitioners burn the fluff or process it further into a cigar-shaped stick. They can use it indirectly too burn it on the patient's skin. Moxibustion helps to increase blood circulation, tonify energy, stimulate the digestive system and boost the immune.

We are soft reopen with a very limited menu of services at Houston Cupping Therapy, under the direction of our spa manager. Appointments will be listed on our online booking system. https://www.genbook.com/bookings/slot/reservation/30239771

We have elevated our already hyper clean, safety first protocols with expert guidance from our medical director, Centers for Disease Control (CDC), Texas Medical Board, Texas Department of Licensing & Regulation (TDLR), City of Houston, and State of Texas.

In addition to feeling completely pampered, here’s what you can expect for your spa visit to Houston Cupping Therapy:

Additional questions place don’t hesitate to give us a call! We are excited to reopen. Thanks in advance for your patience as we catch our rhythm with our new safety protocols. 832-548-1323